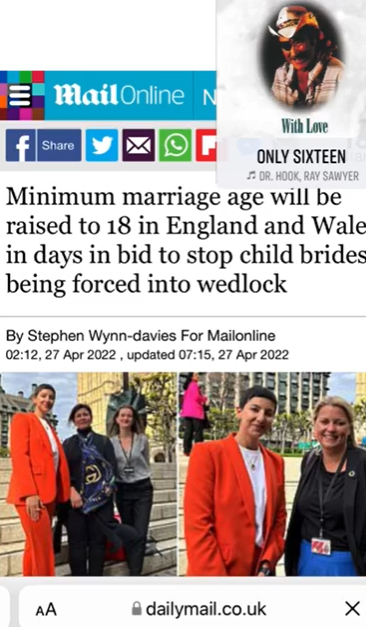 ‘Minimum marriage age will be raised to 18 in England and Wales in days in bid to stop child brides being forced into wedlock.’

In this article, Stephen Wynn-davies focusses on immigrant brides but neglects the thousands of women who ‘had to get married’ because they were pregnant in the ’50s ’60s. Today, there will be a huge number of upset and angry Baby Boomers like me.

How do they feel? It was legal then to get married, and parents sanctioned it because the alternatives were as follows:

ABORTION not legal – with the NHS, you had to be sanctioned by two psychiatrists that you were unfit to give birth

ADOPTION was – preferably after a suitable stay with an ‘Aunt’ so that friends and neighbours didn’t know.

MARRIAGE made it socially acceptable and sod the lives of the teenage parents and children involved.

Why did women get pregnant then – because the pill wasn’t available to unmarried women.  so there were accidents.

Yes, at 16 you could get married, but were you mature? Mature enough to have sex, but not to carry the burden of mistakes. Mistake? No, it was classed as SIN.

I am today, thinking my parents and his parents (now deceased), would face seven years in jail for what they put me and my boyfriend through, never mind the bewildered child that nobody wanted, born to teenagers.

Dee Harrison and I have written this book ‘Feeding the Gods’ by Elizabeth Harrison. It covers the years 1975 – 2005 and the experiences of four women who meet at college. It is fiction, but our stories about being teenage parents are there.

Elizabeth Harrison is our pen name, we are Dee Harrison and Liz Buxton, and we met on our first day at school. Liz had her rabbit picture displayed on the noticeboard and Dee was one of the first to tie a bow and get her name on the black board. We were five years old – was this an early indication of the direction of our skill sets – practical and logical, art and science?

We grew up in the 1950s and 1960s when there was little encouragement for women to challenge traditional expectations which were; a job (not a career), marriage, children, a girdle (google it), a perm at age forty….and invisibility thereafter.

But there were always women who dared to mix things up a bit. And that was us.

At primary school, Liz joined the woodwork class and Dee the chess team – the only girls. Neither of us liked grammar school discipline, with its demands for inexplicable conformity – kneeling down to have your skirt length checked; a detention if you wore a black bra. Rather than make us conform, this kind of discipline fuelled a desire to get away and do our own thing. When we met up some years later, age twenty-one, we literally bumped our respective baby bumps into one another at a local supermarket. We hadn’t got so far then.

By the time we were twenty-three, we had five children between us, so much for doing our own thing. Unsurprisingly, by the time we were thirty we were both divorced. Now, with no one to tell us what to do or say, we were liberated. We both went back to university, we got good jobs, and as single parents, brought up our children. We had fun and we shared so many experiences, and often said, ‘this is one for the book’.

Some ten years later, we had both met kind men who treated us as equals, and we married them. Then our lives then took totally different paths again with Liz sailing the high seas, crewing across the Atlantic, and living aboard a yacht sailing the Mediterranean; Dee working in IT, and becoming involved in the start-up and development of two successful software companies. When we finally had more time on our hands, the idea of ‘the book’ took hold. As we live on different sides of the country, remote working using Skype worked well for us long before lockdown made it popular. Writing together is both challenging and fun and we have learnt to integrate our different styles and roles into a creative writing process.

Feeding The Gods is a tribute to women brought up in the 1960s and 70s and their experiences in the decades of social change that followed. Is it autobiographical? no, but we did draw upon our experiences and those of others.

Feeding The Gods follows the lives of four women who meet at a university party in the mid 1970’s. When, thirty years later, one of them dies in suspicious circumstances, the subsequent fall out uncovers lies and betrayals. In their search for the truth, the women take on drug companies happy to put profits before safety, and a government desperate to cut the healthcare bill. 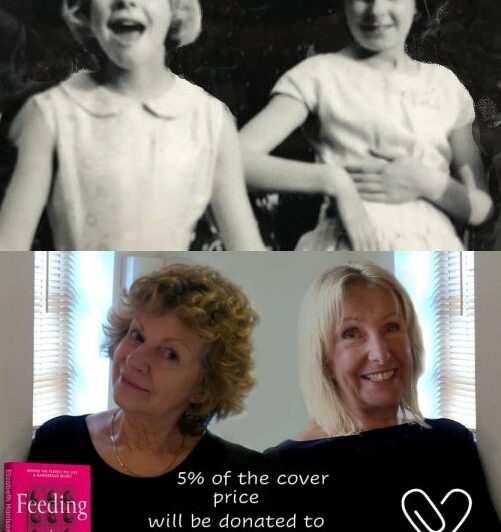 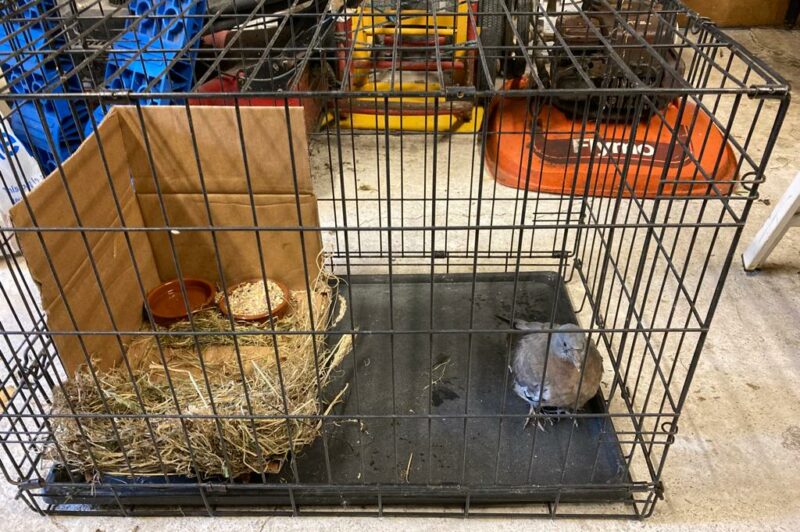 Apparently baby wood pigeons can’t fly for the first seven days, so the parents come and feed it on the ground.